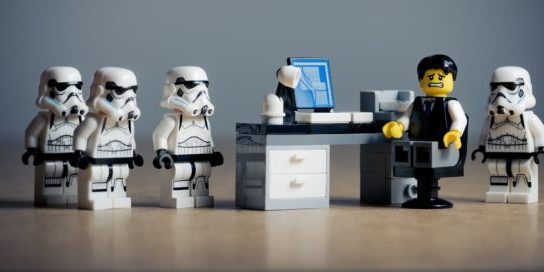 There are two types of people in this world: those who love Star Wars and those who have never seen Star Wars. It is, without doubt, one of the most successful movie franchises ever created, spanning over 40 years, and producing nine ‘episodes’, two prequels and countless other spin-off content, including an incredibly questionable Holiday Special.

However, it was only when re-watching the movies after I began working with DCo that I realised that at the heart of Star Wars is a lesson in leadership. There is the lighter and brighter side of leadership, shown by the caring and fundamentally good Jedis, and the darker side, exemplified by the intimidating and threatening Siths.

In celebration of Star Wars Day (May 4th), we have compiled 8 lessons in leadership that we have taken from the Star Wars movies.

‘I find your lack of faith disturbing’ – Darth Vader

If you don’t have faith in your company, your role, and yourself then you’ll fail to meet and understand your own and your organisation’s goals and will struggle to commit to the bigger picture. Alongside this, a team lacking faith in its leader will find it difficult to perform cohesively, regardless of their talent. Everyone in the team must have trust and confidence in their leader and the product or service the business is offering to achieve meaningful results. The best way to do this is to be as transparent as possible with your team and to communicate any changes as soon as you hear about them.

‘Train yourself to let go of everything you fear’ – Yoda

By taking yourself out of your comfort zone, amazing things can happen. Embrace challenge and refuse to let fear hold you back from achieving your goals. Confidence is a key component to successful leadership; leaders who are ruled by their insecurities can end up overcompensating by becoming either a doormat or a dictator. You’ll regret not acting out of fear more than acting in the best way you thought possible at the time, even if it doesn’t work out as you initially planned – better an ‘oops’ than a ‘what if’.

Yoda shows great wisdom here; failure is should not be regarded as a ‘stain’ on a leader’s record but instead as a device to learn and improve. After all, as Yoda also said, ‘the greatest teacher, failure is’. Leadership is something that you have to actively commit to on a daily basis, whether you’re leading a small team or a large company. There is no trying to lead – there is simply leading or not leading. Many people are guilty of using ‘trying’ as an excuse; by failing to fully commit and instead remaining in the mindset of ‘I tried it and it didn’t work’, you prevent themselves from persevering to achieve their desired result.

Even the Imperial Forces know the power of giving honest feedback as soon as possible. Saving up all your thoughts on performance for an annual review isn’t effective. Instead, offer feedback when it’s most useful to help your subordinates improve and apply corrections as they go.

Having the courage to build up your employee’s strengths and help them work on their shortcomings will help to create a culture where mistakes are fuel for further learning and development. You will also increase your employees’ commitment to their role for congratulating them for a job well done. But, withholding feedback can make your employees see you as weak and is a negative blow to employee faith in you.

A lack of honest and transparent communication in the workplace can have a detrimental effect on employee wellbeing and can breed low trust, disengagement and imposter syndrome.

As a leader, it is vital to remain alert and recognise when current strategies aren’t working. Where we discussed perseverance in a previous point, great leaders also know when to throw in the towel and rethink their plans when they’re just doing the same things and achieving the same results over and over again. The most important thing, as C3PO says, is to reframe something you’re struggling with and, as a result, do things differently. Sometimes this won’t sit well with those you manage, but if you keep the bigger picture in mind and communicate your reasoning, any resistance should be kept at bay; sometimes a loss now can lead to a bigger win further down the line.

One of the greatest things a leader can possess is empathy. Empathy will allow you, as a manager, to address your preconceptions and provide you with additional insight into a range of situations. You can use this additional understanding to help you to explain your perspective on situations and give your team the feeling that their concerns are being heard and that their opinions matter.

Empathy will also allow you to be vigilant in your leadership and ensure that the choices you make will benefit the company and your team and not always yourself. Remember: Darth Vader wasn’t always evil; it was his poor choices that led him to the dark side.

‘Help me Obi-Wan Kenobi. You’re my only hope’ – Princess Leia

At the very beginning of A New Hope, when Princess Leia is in trouble, she does what every good leader would do and asks for help from the most appropriate person. Never be afraid to ask for help if you need it. One of the signs of a great leader is that they recognise that they don’t have all the answers, but they know what they don’t know and are willing to ask others for help. Princess Leia is a strong character who understands that the Resistance won’t ever win without assistance – and neither will you.

Alongside this, Star Wars highlights the importance of mentoring. Luke Skywalker had Yoda to teach him everything he needed to know about becoming a Jedi to prepare for his fight against the Empire and, as a result of great mentoring developing and refining Luke’s existing skills, Darth Vader was thwarted.

‘All who gain power are afraid to lose it’ – Emperor Palpatine

Managers who rely solely on their position to give them the authority to manage others will struggle to achieve good long-term results and may be challenged by their subordinates. Leaders have influence, which does not come from position, but instead from the engagement you have with your subordinates, the clarity of your communication and the followership you create in others. Don’t be afraid to chip in with your subordinates and take on some of their workload if you have a tight deadline to meet just because you’re their leader now, otherwise you could risk creating a divide between you and your team.

May the force be with you.